There are more than one way to determine the gender in nature. We humans depend on who is the carrier of the Y chromosome - XX female, XY male -. Other species such butterflies or chickens depend on the W chromosome - ZZ male, ZW female. But there is still another surprising possibility: the environmental sex determination.

Temperature plays a key role in a special type of this system, being very common in crocodilians, turtles and other reptiles. This nongenetic way of determine whether an egg develops as male or female occurs after fertilization.
For instance, in some turtle species, like Trachemys, eggs from colder nests result in all males, whereas eggs from warmer nests turn into females. In crocodilian species — the most studied is the American alligator— both low and high temperatures result in females, and intermediate temperatures become males.


It is still unknown the exact pathway towards maleness and femaleness. Unlike mammals, sex determination in reptiles is hormone-dependent, and estrogen is essential for ovarian development. Also, the enzyme capable to convert testosterone into estrogen, called aromatase, is very important in the determination.


In Emys, the aromatase activity is very low at 25ºC - when the nest is producing males, but at 30ºC this enzyme increases dramatically and as a result, the eggs become females. This activity is also observed in terrapins -Malaclemys terrapin: the inhibition of the aromatase masculinizes the gonads.

There are several hypothesis about the aromatase, such as: is the gene itself or the resultant protein which is related to sex determination? Are there other involved proteins? Is aromatase and the sense of temperature related to central nervous system by nerve fibers? Is the regulation via gene Sox9, like in other vertebrates?


The impact of habitat loss and deforestation may lead into differences in wild populations. Therefore, if you find turtle nests or alligator, do not touch or move, something amazing is happening there! 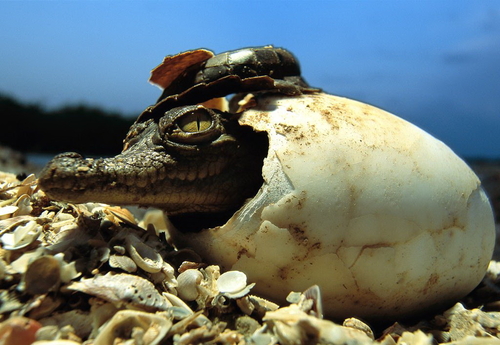